So reality is hitting in hard this week. Tosh O'Donnell is the amazing singer who keeps me entertained in the hospice with stories of growing up in Glasgow:

"See, we knew we were gaeing up in the world when we moved into a new place – it had an outside loo that LOCKED!"

And then made me weak at the knees with his amazing singing voice.  His version of Strangers in the Night was my favourite, ever. But this week I was told he had died, suddenly and at home.

It was a shock. Maybe I should be expecting it. This is a hospice, after all. But we were having so much fun! And we had such great plans!

I was so miserable I went home. I sat in the forest on the edge of the quarry where I live. I was really angry. I remembered back to all my favourite moments with Tosh. Him looking at his 28-page social work form and saying:

And then breaking into another fab song. Then winking and telling me:

"O I'm no interested in being ill. I wiz always a nifty wee guy. The wee guy wi a big voice."

I remembered a mind game I was taught by Process Work founders Amy and Arnie Mindell to cope with death. Imagine how it will be in this place that you are in now in 150 years. Everyone you know will be gone. Picture your friend who has died. What quality of theirs lives on?

I did that, sitting on the quarry. Tosh's wicked grin, and his words "nifty wee guy" came singing out of the sky. Cheeky. Cocky. I miss you, Tosh. Keep singing. 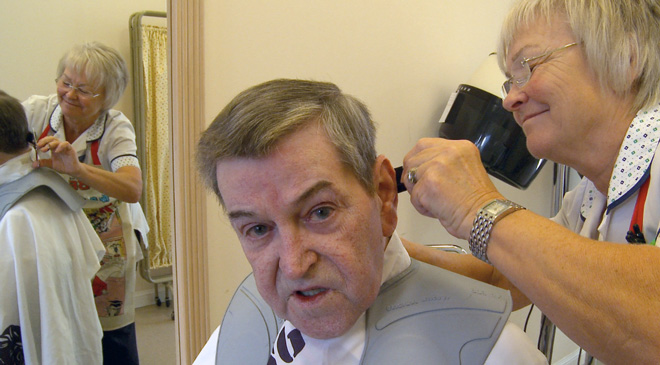