The documentary film Seven Songs for a Long Life is due to be screened across the UK during Hospice Care Week (5 to 11 October 2015). ehospice caught up with the team behind the film to find out more.

In Seven Songs for a Long Life, filmed at Strathcarron Hospice over a number of years, we see six patients, a nurse and a fundraiser deal with terminal illness with humour and a passion for music.

Over 50 hospices have already signed up to screen the movie. What is its appeal?

Sonja Henrici (producer): It should be a great fundraiser!

And even more than that, when you are part of a big audience watching a feature documentary of this quality, something special happens: there are themes in the film that affect us all, and people will find they think about them for weeks and months afterwards. That can only be good for all of us.

What is it about the film that it has this impact?

Amy Hardie (director): It is unusual to be allowed to take four years to make a film. That time let me get to know the people using the day care facilities at Strathcarron Hospice.

In the last years of life there can be an intensification of lived experience, and that can throw up a few surprises.

Each person in the film is so different – whether it is Tosh who refuses to fill in his social work form and just wants to sing instead; or Alicia whose TV shopping habit seems wasteful – until you realise she sells what she buys to raise funds for the hospice. The beautiful young mum might break your heart as she writes her will, but you cannot imagine her extraordinary turnaround at the end. Perhaps it's Nicky that we get closest to, who is juggling four kids, hospital and hospice stays, an Elvis look-alike husband, who goes through the biggest journey. Or is it Iain, the speedway racer and former youngest DJ at Tiffanies nightclub, who is determined to stay out of wheelchair.

Everyday heroes, each and every one of them.

There is someone for everyone in the audience to relate to. And it helps that the songs are sung so beautifully!

What do you hope to achieve with the screenings?

Amy: Scientific and medical achievements in understanding and treating disease have reached an unprecedented level of efficacy, leading to ever increasing average life expectancy – but not, alas, guaranteed.

How do we cope with this uncertainty? How does it change our sense of who we are? How should palliative care respond? Can the public have clarity around their end of life choices? Are we really so scared of death that we prefer any intervention, however traumatic, to the prospect of a death at home or hospice, as pain-free as possible and surrounded by our friends or family?

My experience in the hospice showed me that talking about our end of life care can really make a difference. And what we call 'talking' is often actually just listening: as Mandy, the nurse in the film, says: "We want to fix it. And sometimes you just can’t fix it. But what you can do is listen. Really listen. Listen properly."

I do think that whether you are a patient, relative, friend, health professional or just someone who may have to die one day, this film offers the most gentle and pleasurable route into considering your own mortality.

That is the essential thing: making death approachable enough so that people can make decisions they can be really happy with.

It is about reducing fear, and replacing it with knowledge.

The documentary cast in this film are honest, generous, funny and emotionally articulate front-runners in a journey we will face.

How did the movie come about?

Erna Haraldsdottir (former head of education at Strathcarron): Art is finding its way more and more into palliative care as a way of supporting people with the difficult task of engaging with death and dying.

The hospice was already exploring a range of creative interventions but couldn't afford film-making until we applied for the Creative Scotland grant.

As with the other creative arts, we felt that Amy could be based in daycare, although as a hospice we were anxious to develop skills to support carers and patients to make and edit their own films.

We were always clear that any work with patients be patient-led, without an agenda, and without preconceptions, to see what emerged. And what happened was that people wanted to forget about being patients, and some patients started to sing to the camera.

There were many things to think about, as this way of working was new to staff and patients in the hospice and us as well!

What was crucial was support from the day care staff and this grew throughout the project as Amy screened small films she had made of people singing to her during the Christmas party.

But of course even with a one person camera crew like Amy, there were days when the filming seemed too much. We dealt with the challenges by taking breaks from the filming, and having open forum meetings with staff and patients.

We carried out evaluation of patients as well as using informed consent principles to ensure we were ethically responsible.

What were the challenges?

Irene McKie (director of Strathcarron): Amy’s first short films featured plenty of singing and cake and laughter. The image of Strathcarron Hospice was of a nice party with lots of fun and nothing more serious. It was too happy and we asked her to re-edit, to show a patient taking ill and receiving medical care in day care – it became a powerful film that said our patients are skating on very thin ice.

Over the three years of filming we have had some negative comments – some of our volunteers and staff felt that patients were singing too much and the filming was taking up too much space. But the patients didn't think this and we had to learn to trust them and their judgement. Most patients lived to see the first edit and some will be at the première.

But of course there are many more patients who were filmed than have ended up in the final feature, and that can be an issue. However, Amy made short films for everyone she filmed, so all have footage that is rich and valuable to them, their families and Strathcarron Hospice.

What was most rewarding?

Erna: Speaking to the patients and hearing them describing the joy they had in making the film as well as seeing the film extracts.

For them it was so important that they were able to tell their personal story, and to be seen as strong individuals with their own characteristics. They loved the idea that with the film they were challenging the perception of patients in a hospice as being weak and vulnerable and hospice as a place to be scared of.

Were you surprised by the reality of hospice care?

Amy: What I saw in the hospice was the coordinated care from literally hundreds of volunteers and staff who are dedicating their time and skills to helping people navigate their last months or, nowadays, their last years.

I believe that the film does express the courage, humour and creativity that I saw there. As Irene says "We only have one chance to get it right."

Hospice Care Week is the perfect context for these screenings. I can’t wait for the opening night, and want very much to be there for the discussions around the themes that I hope will play out in the following weeks and months.

Through collaboration with the Scottish Documentary Institute, hospices across the UK are able to screen Seven Songs for a Long Life for free, and can use the screening as a fundraising activity (eg through selling tickets or organising a collection). To find out more, go to this page or contact the team here.

This interview was first published under the title Meet the team behind feature documentary Seven Songs for a Long Life on ehospice.com. 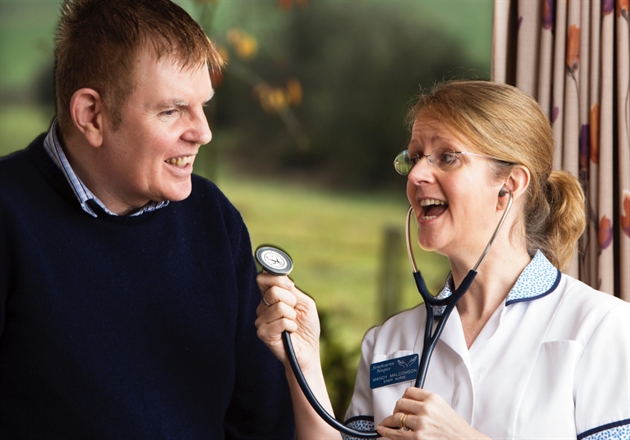