...a nice way to set out the paradoxes facing the inaugural Thinking About Dying? research workshop hosted by Professor Gillian Howie at Liverpool University. Contributions from Buddhist and Hindu theology, from humanism, from philosophers and clinical psychologists sparked off debates about the medical modeling of death and physical crises.

It was an Isak Dinesen quote that prompted us to look at how we make meaning of suffering, and even death:

“All human sorrows can be bourne if you put them into a story or tell a story about them.”

Beverly Clack, Labour counsellor and professor at Oxford Brookes University pointed out that it might not be easy to tell these stories just now. The current culture in the UK and the US is aspirational, making us highly motivated to be a success. ‘Just do it!’ And success comes defined right down to the shape of our bellies, the logos on our clothes, the food we eat, our postcodes. It invades every aspect of our lives – we should have partners, good-looking partners, actually, and children. In fact the children need to be beautiful too, and successful themselves… etc etc. To miss out on any of these goods is seen as an aberration and, horrifyingly, failure.

This strict code of success makes it hard to see the value in loss, or crisis. And yet poetry and stories have described the ‘healing crises’ for thousands of years. Think of any classic or any fairy story: Persephone’s rape and her devasted mother; Lear driven mad by his children’s betrayal; Hänsel and Gretel abandoned in the woods. Paul Tillich summed it up when he wrote: “The depth of suffering […] is the door, the only door, to the depth of truth.”

Now I love this word ‘truth’. So contentious. So context-dependent. And yet what was so exciting about this workshop was how different contexts collided.  Margrit Shildrick from Linköping University in Sweden put a new spin on the therapeutic effect of storytelling when she described her current research. She is working with heart transplant patients, asking questions as a philosopher, before and after their life-saving procedure. The patients had high hopes of the heart transplant – they wanted their old life back. But a heart transplant is a complex bodily crisis. She discovered that those who could not accept that the crisis required a change of identity, in other words, who could not find a story that accepted loss of a former identity, and acceptance of a new, had much worse medical outcomes. Some even stopped taking the medicines to support the transplant and threatened their survival.

The ‘truth’ here is a complex mix of story and biology, surgery and imagination. The truth is that sometimes if you want to survive you have to accept crisis, and loss, and embrace a radical change of identity. Morny Joy, Professor at University of Calgary sent us home with a last provocation: taking Riceour’s sense of choice as defining consciousness ‘the brain not being governed by necessity’: can imagination make the difference between well-being and dis-ease, even, between life and death?

For the next blog post I am going delve into how science thinks imagination might indeed make a substantial difference: looking at Ben Goldacre’s Bad Science and Daniel Moerman’s riveting Meaning, Medicine and the Placebo Effect. 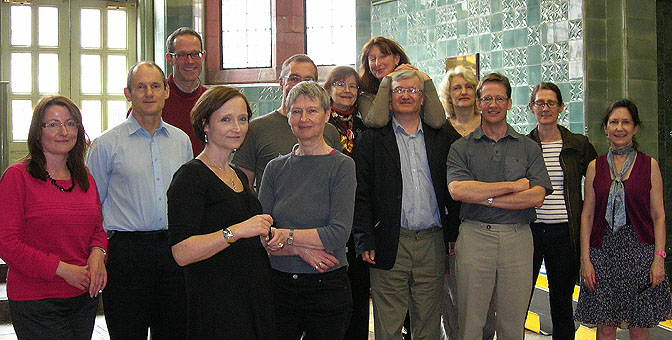